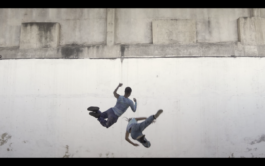 To rave the racial is an image used to think about spatiality without resorting to formal fictions (space and time). Departing from the equation racial ↔ non-local, artists Davi Pontes and Wallace Ferreira choreographed an artistic experiment that perceives difference without separability and offers a way of revoking spacetime as the ultimate descriptors of everything that exists in this world.

In a universe presented through the principle of non-locality, displacement and relationship cannot describe what happens because every single particle is implicated, that is, every single particle exists with one another, without spacetime. Non-locality exposes a more complex reality in which everything exists both here-and-now (spacetime) and virtually (non-local). One of the characteristics of post-illuminist thought is the capacity to determine, which we can achieve by observing two logical frameworks of thought: conditional and syllogism. The choice of ↔ (bi-conditional) to express this refers to its ability to remove determination from both sides.

In a choreography that doesn’t resort to onto-epistemological pillars, the artists draw on the work of artist and philosopher Denise Ferreira da Silva to create a film without the ghost of linearity. The result is an experimental work that uses the same procedures applied to their choreographies; a series of actions that deal with uncertainty, disorder and the provisional in order to engender an ethics for Black lives, which can operate outside time.